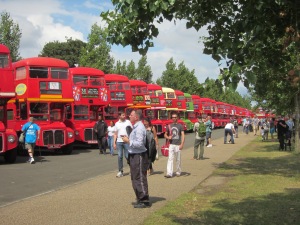 RM 1, first in the fleet of London’s most iconic buses celebrated it’s first sixty years in style by throwing a party for it’s mates in Finsbury Park on the 12th and 13th July 2014.  A total of one hundred and thirty seven of it’s Routemaster buddies turned up for the bash in a range of colours all parked side by side, some converted to mobile homes or hospitality vehicles, but most preserved as working London buses.

The first prototype, RM 1, was unveiled to the public in 1954.  It was then involved in a number of rigorous tests and trials more fitting for Concorde or the Space Shuttle than a humble bus before finally being put into service two years later. The next two prototypes appeared in service in 1957 and 58 respectively, while the fourth, CRL 4 built as a Green Line Coach went into service in 1957, but it wasn’t until 1959 that the production Routemasters went into service en mass, at which point the first three prototypes were withdrawn and relegated to the training fleet.

There were several teething problems but after a few years these were ironed out as the Routemaster became the bus loved by Londoners and admired across the world as a symbol of our capital city.

Over the weekend millions of bus admirers were joined by countless Londoners all coming to pay homage to the bus that took them to work or school, on shopping trips to the West End, days out to the Zoo or the Tower Of London, or even for a ride in the country or to Windsor Castle by Green Line.

Routemasters gradually started disappearing from the London streets in the mid 1980’s, with the end finally coming in November 2005. From then on a small fleet of ‘Heritage’ Routemasters (re-engined and slightly modified) stayed on to run short journeys on tourist routes 9 and 15 across central London. But while visitors to the city would chose to ride on them instead of the normal modern service bus, they could never be the same.

As I write this, the Heritage vehicles are coming off route 9, it’s been noted that the tourists now want to ride on the New Bus For London (aka the ‘Borismaster’ or it’s official title ‘New Routemaster’) and maybe that’s a good thing. It would be wrong to mourn the passing of an icon when it now has a very worthy successor with all the qualities of it’s predecessor, waiting to show us what it’s got.

The Routemaster 60 celebrations at Finsbury Park proved that the travelling public will never forget the bus that they loved. With at least one hundred and thirty seven of them in preservation, there will be plenty of opportunities to reminisce about them for many years to come.